History of the Heights

La Habra Heights and most of the city of La Habra lie within the La Habra Rancho, a grant which Marina Roldan received from Mexico, October 22, 1839. He sold to Andres Pico, a brother of Pio Pico, Shaped like a wedge of pie, pointed south, La Habra Rancho was partly in Orange County. La Habra means a low pass in the mountains.

A great drought in 1861 ruined Sterns and the lands went to San Francisco capitalists. The new owners organized the Los Angeles - San Bernardino Lands Company and put Sterns Ranchos on the market at prices ranging from $2 to $10 per acre. Many of the purchasers were Basque sheep growers from the Pyrenees mountains. In 1900,  Mrs. Sansinena decided to sell 3500 acres to W. J. Hole. This 3500 acres was the area later to become the Heights, it was sold at about $15 per acre. 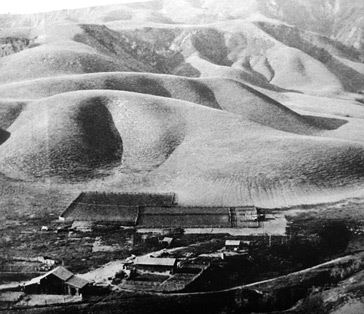 
Water reached the Heights in quantity in 1921 when the reservoir at Hacienda and East Road was completed and as the distribution system crawled upward over the hills, so did the blanket of green groves. Edwin G. Hart was president of the Water company from 1919 to 1939. His successors have been H. B. Griswold, P. W Allen, Ernest Mason, Walter Beck, Fred Nelson, Frank Cressy, David Field and John Hart.

In order to get started and finance the Water Company, Hart let several large parcels to developers. R. L. Reynolds bought 307 acres west of Hacienda which became known as Subtropic Farms. Other large parcels went to Switzer syndicate, E 0. White and Peter Weisel on Fullerton Road and the Golf course on East Road. Hart also started marketing 5 acre and larger parcels in many cases with contracts to put in and develop avocados. Some of the early purchasers of avocado land were Clyde Wilcox, Price and Bishop, Wm. Holloway, G. W Beck, Dr. H. B. Stone-brook, H. B. Griswold and F. D. HaIm. Lou Davenport had a fine grove of avocados on Popanoe Road.


During the 1920s, the peak of development, hundreds of men were employed, including engineering crews, mule skinners, pipe line men, nursery men and laborers building roads and pipe lines, contouring the hills and planting avocados. throughout the Heights. Today these trees stand high above the orchards and add much to the beauty of this area.

Agriculture in the early days was not limited to avocados. Gene Barley and Lauren Meod operated nurseries an East Road. Flowers were grown on the slopes above the county line. Subtropic Farms raised vegetables such as rhubarb, cucumbers, tomatoes and string beans. Oranges and lemons were planted in the valley lands. At one time about 40 acres were in citron production.

However, avocado growing became the dominant agricultural pursuit in the Heights. Their start dates back to George W Beck (shown on the right) who planted avocados along Cypress Street in 1910. Later he bought property from Hart on Kashlan and planted more avocados. His son, Walter Beck, became one of the foremost authorities on avocado culture. The Heights is indebted to the Beck family not only for their pioneer work in avocados but also for their fine cooperation in Heights community affairs. Many new avocado varieties were originated here including the Hass developed by R. G. Hass. Roads through out the Heights were named for avocado varieties such as Chota, Dorothea, Popenoe, Sharpless, Ganter, Benick, Kashlan, Moyapan, Nabal, Panchay and Kanola. Ahuacate road of course means avocado - in Spanish this means water hag.
A survey in 1930 showed that there were 1,292 acres of avocado orchards, 282 acres of orange, lemon and citron orchards, 43 acres of miscellaneous plantings like persimmons, cherimoyas, passion fruit, papayas, sapotes, bulbs, flowers, and avocado and citrus nursery stock or a total of 1,617 developed acres. At that time also there were 95 homes some costing as much as $100,000.

Hacienda Golf Club was one of the earliest arrivals in the Heights. Alphonso Bell, a land owner at Santa Fe Springs and a lover of sports, persuaded businessmen in Whittier, Anaheim and Fullerton to start a golf club. Starting with a barn near the present lakes as a club house and nine holes on the West end, the club has grown to a beautiful 18 hole course with a spacious Spanish style club house. It is now one of the oldest and most picturesque golf clubs in Southern California 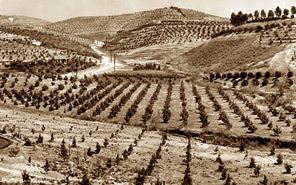 
Some magnificent homes were built in the Heights in the late 1920s and early 1930s such as the Herman Smith and Joy Richart homes an West road, the B. F. Axelson, Alden Kerfoot and Demo Harshbarger homes on Avocado Crest, the Weisel (shown on the right) and Beckwith homes on Fullerton road, the Harshton home on Kanola, and the E G. Hart, Laura Scudder and 0.0. Allen homes on Reposado. Dr. Swan'­s home on East Road was also a show place. All of these home owners may well be termed celebrities. Herman Smith, founder of the Smith Industries International, Inc. is known throughout the oil industry. Dema Harshbarger, spearheaded NBC shows such as the Fred Allen show and later became press agent for Hedda Hopper. Laura Scudder we all know as the potato chip queen. Other celebrities who came to the Heights include Kirby Page the author, Frank Church, the fight promoter who backed Fidel La Barba, Jack Halt, the Western film star, and Todd Margan, the fighter. Not all of the homes were mansions and not all of the people were celebrities. Homes ranged from summer cottages and modest farm houses to dreamlike structures and spectacular view sites. Nearly all homes were individually designed. Many were hidden in the irregular tree covered terrain and reached only by private roads.

A 1926 Edwin G. Hart real estate brochure on La Habra Heights stated, "The Second Beverly Hills has started already it is dotted with numerous suburban homes of the very finest type.'' Demo Harshbarger, originally from Chicago, stated that she came to the Heights after reading a National Geographic article citing the three most beautiful living spots in the world as La Habra Heights and locations in Italy and Africa.

It is small wonder that La Habra Heights grew in stature as a fine residential community. By 1939 about 2000 of the original 3500 acres owned by the Hart people had been divided into groves and spacious home parcels owned by about 1800 residents from all parts of the United States. In December 1939, Edwin G. Hart the guiding force in this remarkable community was struck by an automobile and killed. 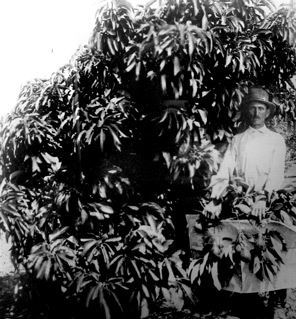 
Early in 1939, Edwin G. Hart, Art Sucksdorf, Glen Annabel, Alex Morrison, and H. B. Griswold met at the Dinner Bell Restaurant an Whittier Boulevard for the purpose of reorganizing the La Habra Heights Improvement Association. An earlier organization in 1932 had became inactive. After the Dinner Bell meeting Griswold called a general meeting at the Hacienda Golf Club which set up the object and the Construction of the present association. The object; as stated at the start, remains unchanged, "To encourage and promote the development of the Heights as a rural residential area.'' It has worked constantly for agricultural betterment, improved roads and roadside planting of bougainvillea, oleander, and other colorful shrubs. It has distributed thousands of trees to maintain the green belt character of the area. It played an active role in developing an oil well drilling program, that fitted in with fine residential development. It worked with the Regional Planning Commission in securing RA-1 zoning in 1949 and has successfully supported this highly beneficial ordinance in succeeding years.


Prior to 1942 the closest fire station was at San Dimas. The method of fighting fires was far Cecil Knowlton to get a crew with water buckets and wet sacks to beat back the fire until San Dimas equipment arrived. In 1939 a disastrous fire started above Reposado and Hacienda and swept eastward almost to Fullerton Road

In the spring of 1942, Clement F. Levins became the "Father" of the fire department, by suggesting to his friends, Ernest Sherwood, Howard Cooper and Art Sucksdarf, that fire protection was the number one need in the Heights. This small group of men purchased a "nurse" rig from Mr. Cooper and set out to collect funds from their neighbors to pay for it. The fire truck was kept at the ranch of Cecil Knowlton on Fast Road.

On October 8, 1942, the department was incorporated. Acting directors were 0. D. Belanger, Art Sucksdorf, Fire Chief, Sam Eastman, Young Wilhite, Larry Marsh and Mr. Levins. With Mr. Wilhite as master of ceremonies, the group held a fund raising campaign in 1945 and raised over $3,000 from their neighbors. As a result of this a Seagrave fire truck was purchased. As the department grew, the board authorized the installation of many fire hydrants. In 1946 they purchased a new International Army fire truck that carried 400 gallons of Water. Today, with a fulltime Chief and Fire Marshall and a staff of paid volunteers, this community is provided with extra-ordinary fire protection at a cost much lower than those communities under the County's protection.


Conversion to RA-1 Zoning in 1949 is another outstanding example of community cooperation and purpose. During the 40s, there were some signs of deterioration in the Heights. One tract of bottom land, near Encanada, was subdivided into four lots per acre. Another parcel on Avocado Crest, was being cut into approximately 1/2 acre lots. To combat this trend the Heights' Association, under President Wilbur Jadden, sought the cooperation of the County Regional Planning Commission, in working out zoning revisions that would insure the orderly and proper course of development in the future.

The association survey showed 81.8% of the residents favoring a minimum land area of one acre and the commission's study showed that nearly 80% of the parcels were approximately that size. The dual efforts of the Association and the Planning Commission resulted in amending the official zoning plan of La Habra Heights by ordinance No.5279 (3/1/49) with RA-I zoning (Residential Agriculture 1 acre required]. The ordinance also limited the types of commercial agriculture and prohibited roadside stands and signs of any description whatsoever.

This zoning ordinance is unique far La Habra Heights. The 1 acre minimum land requirement recognizes the limited building area on the steep hillsides, and the limited capacity of the scenic winding roads. Moreover, the people who chose this area far home sites appreciate the rural atmosphere and seclusion afforded by spacious living parcels.

Horses in the Heights


The gradual change in the image of La Habra Heights as an avocado producing area to one of residential estate character, has continued without interruption. Without a doubt, this rural and secluded community has become one of the most beautiful and desirable home site areas in Los Angeles County. Its natural beauty at the start provided an ideal setting for this, but great credit must go to those remarkably individualistic people who chose this area for their homes and developed and nurtured this community until it is unsurpassed in charm and beauty and home-like atmosphere.
Covid-19 Updates
Alert Signup
Employment Opportunities
Pay Online
(Coming Soon)
Agendas & Minutes
Records Portal
/QuickLinks.aspx
Government Websites by CivicPlus®
[]